None
The Queen, also known as Vader Eloha, is a mysterious humanoid entity known to be the mother and creation of Hugo. She parallels The Batter in many ways, being the only other parent and creation of Hugo, and being the only other being known to be able to use Add-Ons. The Queen is in charge of the Guardians as a group, who in turn control various Zones. Her exact purpose in doing so is obscure. Although she is often mentioned, she is never shown interacting with anyone other than The Batter.

The Queen is one of the most outwardly non-threatening, humanoid-looking entities in the game. However, like The Batter, she is confirmed as not truly being human. She possesses a flowing white gown reminiscent of that worn during weddings and other formal type services. She also has long hair that appears to be related to tentacle-like ends that seem to be coming out of her body. However, these ends may actually come from her elegant attire. Her face is either non-existent or heavily obscured, giving an appearance on her head similar to that of a mannequin. Mortis Ghost has also drawn a version of her with a skeletal face and a crown floating above her head, giving her a different appearance than her sprite.

In personality terms, she exists as somewhat of a feminine counterpart to The Batter. They both share a deep sense of purpose and moral conviction from their actions as well as a willingness to debate such things, at least for a short time. It is unclear to what extent The Queen understands the depths of despair and tremendous problems that the various Zones had descended to by the time The Batter begins his fights. Whether or not she holds to a naïve viewpoint of everything as going well versus believing that even a suffering existence is preferable to oblivion, or holding some other way of thinking, is unknown. The relationship between her and The Batter is questionable, with her at one point calling him, "my love."

During a Q&A on DeviantArt, Mortis revealed that The Queen's audible dialogue is gibberish[1].

In Chapter 1 of the events that take place within The Room, The Batter approaches The Queen, fighting her and eventually killing her after a brief dialogue. The Queen is the protector of Hugo and serves as his mother, though still being his creation. As The Batter challenges her, she exclaims "I won't let you lay a finger on the son that has brought us into this world!".

The Queen is the second hardest boss fight in the game; defeating her is more difficult than the true final boss battle but easier than facing Sugar. Like The Batter, she has three Add-Ons (though hers look significantly more ornate and beautiful than his) that will attack in unison with her. It is unknown if other characters in the game are inherently unable to use Add-Ons or if they are just otherwise hampered in some way (such as being unable to locate them). Unlike Sugar's entities, called "dummies", The Queen's Add-Ons are tough enough to withstand multiple hits. However, The Batter's Add-On named Epsilon is able to eliminate them in a relatively short time through its multiple attack ability.

The Queen herself attacks The Batter by berating him, his quest, and his treatment of Hugo. Despite not physically attacking The Batter, these deal a fair lot of damage and can inflict status effects. The extent to which her comments are either almost entirely true, partly true, or almost entirely false depends on character interpretations, given the ambiguous nature of the game. It is possible that she is correct in that The Batter is an immoral agent of destruction and that he failed as a father-like figure in terms of Hugo, with her words causing direct harm by piercing the perception that The Batter has of himself as a well-intentioned extremist "purifying" the world. It is also possible that The Batter is emotionally failing to keep his generally stoic resolve due to his remaining affection for both her and Hugo, hence why the words hurt so much, yet The Queen is still ultimately self-serving and wrong because The Batter's actions are mercy killings, meant to end suffering that must be stopped. The whole matter is deliberately left open. The Queen's Competences are named after chess terminology. 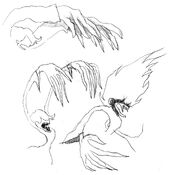 Concept art of an alternate version of The Queen. Possibly mirroring Bad Batter

Artwork by Mortis Ghost, depicting Vader Ehola along with her Add-Ons. It is being sold as a print at his store

Community content is available under CC-BY-SA unless otherwise noted.