Sucré, often referred to by fans as Sugar, is a hidden boss that can be found in the basement of Zone 0. The entrance to the basement is in the room that contains the hint to the puzzle on the ground floor. The Judge mentions the cellar as having been built for her and Valérie.

To gain access to the basement, you must have at least one of the Grand items.

Sugar has short hair and a dark shadow around her eyes, which almost appear to be empty. She wears an open shirt with X's on her chest, and baggy pants. Her sleeves and pants have a stripe pattern at the ends. Dummy heads are seen dangling from her hands, which are revealed through use of the Batter's Wide Angle to be made of candy.

Sugar has been confirmed by Mortis Ghost to be a human.[1]

Sugar's name and attacks heavily imply some sort of fondness for sweets, as do the piles of sugar seen in the room she's encountered in and the item she drops upon her defeat. Her odd behavior makes her a very enigmatic character. She speaks in a rather melancholy, simple, and strange manner, and laughs during her dialogue, similar to Zacharie. She is also somewhat aloof, outright ignoring the Batter's questions and refusing to shed light on herself via "useless introductions". In a way, she seems to be broken by the world and withdrawn, as she believes that everything is frightening.

Sugar is the strongest boss in the game, with a max HP of 12,000. She is, however, extremely susceptible to poison, nullifying any difficulty. She also has four dummy heads stuck on hooks, two on each hand, and one candy on each hook. Defeating her will drop the Grand Chocolatier, which can then be given to Zacharie in Zone 0 (with the rest of elements)  to receive either the Aries Card or Ashley Bat.

Sugar's Competences all relate to desserts, connecting to the Grand Chocolatier and possibly Enoch.

It is heavily implied that she has some sort of personal relationship with Zacharie. After defeating her, she asks the Batter to tell Zacharie goodbye for her, shortly before dying. Talking to Zacharie after defeating her will yield a simple, solemn response, his usual laugh gone quiet. 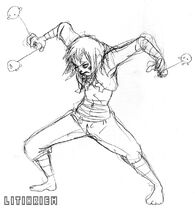 Sugar drawn by her creator, Litihriem.

Some relatively new artwork by Mortis Ghost, it depicts the enigmatic Sugar next to a Porter Spectre. It is being sold as a print at his store. 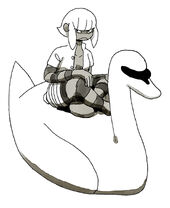 Retrieved from "https://off.fandom.com/wiki/Sugar?oldid=12901"
Community content is available under CC-BY-SA unless otherwise noted.