OFF is a Belgian RPG game created in 2008 by Mortis Ghost and his team, Unproductive Fun Time. It has garnered a sizable following for its story, characters and atmosphere, particularly after its translation into English. It is about a mysterious being known as the Batter, who is described being on an "important mission". The Batter then travels through four bizarre Zones in the world, revealing more as the game goes on.

You play as an outside entity and have been assigned to work with the Batter on his sacred mission: To purify the world of OFF.

Here, you meet the Judge who helps you learn the basics of the game.

You then proceed to Zone 1, where you ride the train to the smokemines. Here, you find Alpha, your first Add-On, who acompanies you on your mission and fights alongside the Batter during the purification of spectres. Going through the mines, you end up at the farmsteads and later the office building where you encounter Dedan, whom the Batter recognizes as hostile, despite being told otherwise. You go to Alma, where Dedan's main office is located, to purify him.

Moving on to Zone 2, you explore the library and encounter Japhet. He manages to escape before the Batter finishes purifying him, so you visit the shopping mall, amusement park, and residential area (in that order) before moving on to the roof of the library. On the roof, you finally purify Japhet.

Proceeding to Zone 3, you make your way around a factory. Contrary to the behavior the Elsen have shown in previous zones, they do not deem the spectres a threat. You discover the highly addictive sugar, how it is made, and its significance to the workers. You face Enoch, the director of the factory and boss of Zone 3. However, as Enoch predicted, the battle is lost, and you are forced to retreat. You face him again shortly after, this time defeating him.

After defeating Enoch, you gain access to the Room, which differs greatly from the environments you have discovered so far. It is a dark, shadowy and dream-like realm, in which you do not encounter enemies, with the exception of the Queen, the game's final boss. During your time in the Room, you solve various puzzles, encounter a little arcade sequence and revisit the three Zone's bosses, who appear friendly and cannot be attacked. 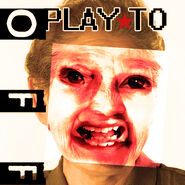 A strange image located within the "Sketches" folder found on OFF's official website. It appears to be two faces mashed together. The file name implies it may have been used as some sort of bizarre ad.

A strange image located within the "Sketches" folder found on OFF's official website. It's a picture of someone saying "but who are you?" when translated. The file name implies that it may have been used as some sort of bizarre ad.

A strange image located within the "Sketches" folder found on OFF's official website. It's a picture of someone saying "get the hell out of my house, now". The file name implies that it may have been used as some sort of bizarre ad. 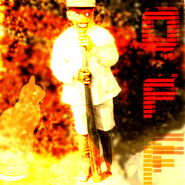 A strange image located within the "Sketches" folder found on OFF's official website. It's an extremely saturated picture of someone in a baseball uniform wielding a baseball bat with the silhouette of a cat next to him (possibly referring to The Judge). The file name implies that it may have been used as a bizarre ad.

An image found on OFF's official website as a pop-up. It's an extremely saturated image featuring The Batter swinging at a ball with The Judge near what appears to be a carriage of some sort. If you look closely into the distance, you can also see three rings that are probably The Batter's Add-ons.

Community content is available under CC-BY-SA unless otherwise noted.